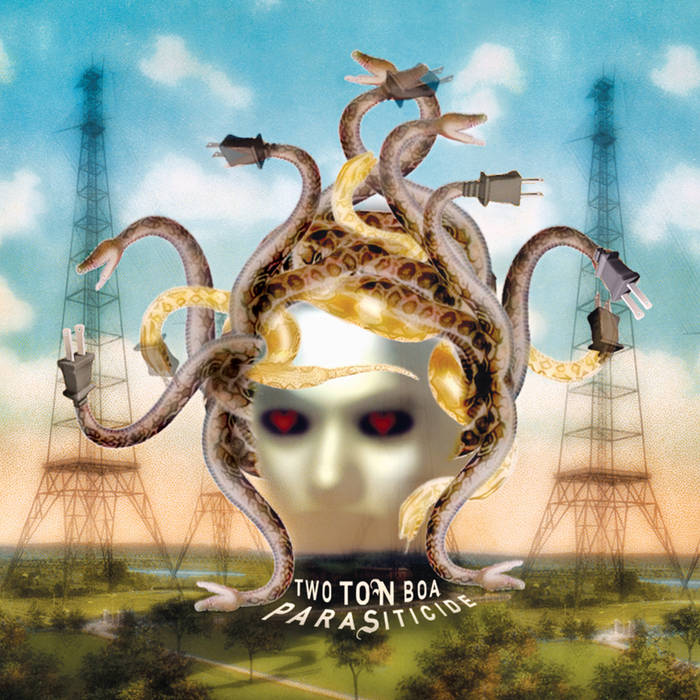 Nightmares. They’re something we all share in common, but seldom share in experience. Like a vivid collision-course journey through shadowlands of our fears and neuroses, Two Ton Boa’s grinding musical landscape is equally unsettling, captivating and enveloping.

The band is led by bassist and classically trained vocalist Sherry Fraser. After releasing a critically-acclaimed self-titled EP and touring the country with acts like L7 and Blonde Redhead, Two Ton Boa has re-emerged from self-imposed exile with a debut album of meticulous beauty and melodic structure titled Parasiticide.

Songs like “Cash Machine”, “Cyanide”, “Gumshoe”, and “HERarchy” are pop songs with jagged edges, while “Bad Seed”, “Your Favorite Bloody Patient”, and “Porcelain Throne” swell with passion and pain, burgeoning into sick flowering crescendoes of sound.

The melodic pound of Two Ton Boa’s grinding, dual-bass sound is the invention of Sherry Fraser. Classically trained on Oboe, English Horn, and assorted baroque recorders, vocalist Fraser fell in love with the bass and composed over 50+ tapes of material on a four track. Overcoming a dread of exposure that kept her music hidden for years, she played her first show as Two Ton Boa while living in Olympia. WA. Slim Moon at Kill Rock Stars quickly took Fraser’s beast onboard. Fraser’s gift of songwriting has enabled her to compose and arrange all musical parts for Two Ton Boa: basses, vocals, keyboards, banjolele, chord organ, and more.

Sherry Fraser culled the weighty name “Two Ton Boa” from a lyrical line in her signature song: “I wore your love like a two ton diamond boa/ I liked you my pet, draped around my fragile neck”. Upon listening to TTB’s “existential wail of a debut EP”there can be no doubt Fraser’s charmingly raw vocals are the heart and driving force behind Two Ton Boa. Her gargantuan emotional range has been described as scary, sweet, raw, mysterious, funny, leering, defiant, and downright frightening - she has been declared as possessing one of the greatest vocal ranges in independent rock today. Her “singular style of delivery is equal parts sensuality, bravado, and strength; she slurs and cajoles her luscious vowels and consonants amidst a bludgeoning, double-bass carnival of sound.”1 Her vocal expressiveness ranges from “cooing in a manner reminiscent of Portishead’s Beth Gibbons to starkly asserting herself with intense, intimidating force....When passionately performing her own material, Fraser approaches the summit of peaks previously scaled only by the incomparable PJ Harvey.”2

Two Ton Boa at its most powerful rhythmically crushes and melodically charms, devouring listeners through Fraser’s engaging use of hypnotic melodic nets - vocal, lyrical, and instrumental - while other listeners are captured through her addictively catchy, playful craftiness. To sum it up using Billboard’s quote describing the Cruel Intentions soundtrack single (written by Ms. Fraser and covered by alt-rockers Marcy Playground), Sherry Fraser’s pet band Two Ton Boa “tells the story of a dangerous, slithery personality - “She’s got the truth and her tongue for a slingshot”- and the vocal melody slides from one note to another like a snake, completing the image.”