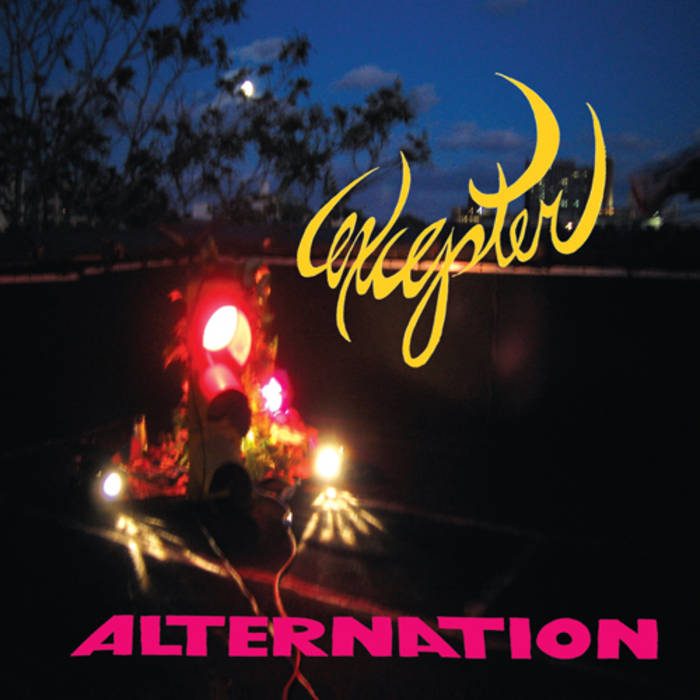 Ian Mathers One of the greatest albums ever made. Favorite track: If I Were You (Live).

Half-recorded in one blizzard, and completed by the next, Alternation is a years-in-the-making, tossed-off-in-a-moment exploration of the difference between EXCEPTER live on stage and EXCEPTER alone at home and the goal to eradicate the distinction between the two. Double the length and twice the depth of past EXCEPTER releases, Alternation is EXCEPTER looking both ways, a geometric expansion around all the territories marked so far in their brief discography: the primal death trips of Ka, the noise pop tropics of Vacation, the long drone goodnight of Throne, the cool electro doom of Self Destruction and the blasted steam cycle of Sunbomber.

Switching back and forth between a Chinatown studio and a Bushwick loft, 24 track and stereo recordings, group sequencing and instant song-craft, solo dubs and the live show, Alternation even features songs played only by EXCEPTER's own Jeff Street base building on pipes and heat. It is at this location LALA moves in with horns to blast our tribute to the evaporation of the ice caps. LINDA drops by to check the local listings.
JON's been here for hours trying to scotch-up the delay. NATHAN's been work-shedding and is loading the programs. But what about the frozen ice cream man and the so-called hot rock stepper? DAN is late, but travels light. JOHN lives here already. Just ask his neighbors. But if I were you, I wouldn't knock knock knock on apartment living. Alternation has been designed to make you meet the ones next door, however affected they are by your new shared vibration ... EXCEPTER.

"AS SMOOTH AS FLUSHING AVENUE"

EXCEPTER is a New York vocal and freestyle electronics band synthesizing live group performance with intuitive sequencing technology. Formed in 2002 by John Fell Ryan and Dan Hougland and featuring Nathan Corbin and Jon Nicholson, EXCEPTER is a constantly changing and self-produced social experiment in the recording arts and public address system engagement. Besides offering several recordings on the independent commercial market, EXCEPTER has also released hours and hours of free music through the internet in the form of their live edit STREAMS series. "ALTERNATION" is the first contemporary album-length release of all-original music from EXCEPTER, a combination of material recorded and composed both on stage and in the studio.